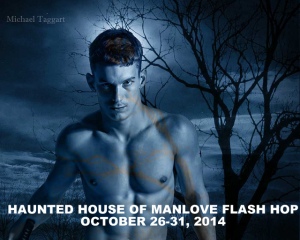 Hmmm, does that ever work?  Anyway, welcome to my cobwebbed little corner of the awesome Haunted House of Manlove Flash Hop, where we writers join together to share some man love and hopefully scare the pants off you (and whoever else you’d like pantsless nearby).  Don’t forget to check out the links listed below to discover more flash – if you dare.  The hop will continue through the 31st.

Forever Mine by Alexis Duran

Are you dreaming about me?

Sean’s eyelids twitched, his long lashes quivered and his head rolled side to side on the pillow. I would have given anything to touch him, to brush his lips with mine, to pull aside the sweaty tangle of sheets. The best I could manage were whispers in his ear.

He flopped over onto his side and brushed at his ear with his hand, as if shooing a mosquito.

At least a mosquito could taste him.

I stretched out beside him on the four poster bed that had once been mine. My riding boots were caked in mud, would always be caked in mud, but no stain marred the coverlet.

I propped my head up on my fist, elbow planted against the mattress and watched him. I loved to look at him with his thick messy blond hair, high cheekbones, inviting lips. I loved it when he grew agitated at night, sweat darkening the hair around his temple, making his t-shirt cling to his shoulders, chest, back. If I was lucky he’d kick off the covers and I could see all of him, even if he did insist on wearing ridiculous flannel pajama bottoms.

If I was very lucky, my whispers would reach him.

Sean, open your mouth so I can put my tongue inside you, taste you. I’m dying to hold you, to taste every inch of you.

He licked his lips. Victory!

My fingers played with his hair. I imagined how silky it felt.

Touch yourself for me. You know how I like that.

Under the covers, his hand slipped down his hip and across his thigh. He groaned. So did I.

Something fascinating was happening under the sheets.

Aren’t you hot? It’s so hot and stuffy in this damn house!

His breath caught and he rolled over onto his stomach. I lay on top of him, pretending I could feel his wonderful ass straining against my erection.

Why do I torture myself so?

With a sudden groan, he sat up. For a moment, I lost of track where I ended and he began. Then we separated. He sat on the edge of the bed. I stretched out in his warm spot. I swore that I could feel the warmth, the slight wetness he left behind.

“Damn,” he said, and ran his fingers through his hair. How I wanted to stroke his back and pull him into the bed. The best I could do was make the water in the glass on the nightstand shimmer. He missed this spectacle because he stood at that moment and went to the window. He pushed aside the heavy drapes and pulled up the creaking wooden frame. Cool air rushed in and he stood there in the breeze, undoing all my hard work.

He rubbed his bare arms and leaned against the windowsill.

“Why do I keep coming back to this place?” he asked himself. To my surprise, instead of returning to bed, he went to the little desk and sat down in front of his computer. Excited, I perched beside him. The device never failed to fascinate me as images, faces, books, all sorts of wonders swirled to life inside of it.

He put on glasses. This was new, but they suited him. They were round and made him look like a schoolmaster I’d once fancied.

“So they finally got the Wi-Fi working,” he said. He talked to himself a lot. I liked to think it was because on some level, he knew I was listening. Or perhaps he was daft. That was okay too.

“Who are you, Avery Remington?”

If I could, I would have died of a heart attack. Certainly I felt the symptoms, a tightness in the chest, tingling, shortness of breath. I watched as he typed my name into a box on the screen.

To my delight, an image of the same portrait hanging in the dining room appeared on the screen. Me, dashing in my riding gear. The artist did a fine job capturing my moody grey eyes.

“That’s it. That’s all the mighty internet has to say about you. The innkeepers know nothing. The church where you’re buried knows nothing. C’mon, Avery. Throw me a bone.”

You’ve been researching me? I’m flattered. Really. Tears came to my eyes. I remember when we first met. The first time you stayed here with your parents and were captivated by my portrait. I woke up for you then, Sean. I bestirred myself. Sometimes I wish I never had. How long since your last visit? Two years? Do you know what it’s like, waiting? Of course not.

Once he brought a boyfriend. That was terrible. The boyfriend was terrible. He laughed at Sean’s suggestion that the old Victorian mansion was haunted. Laughed. Then he did all the things to Sean I’d dreamed of doing. So it wasn’t entirely terrible. I learned some things from that man. I learned that Sean enjoyed being tied up. I could do that. I could even fetch my riding crop out of the chest in the attic, if that’s what he wanted.

Sean rested his chin on his palm. “Why are you haunting me, Avery?”

I laughed and draped an arm around his shoulders.

Because I desire you with an eternal ache.

He didn’t move, but I sensed his muscles tense. Sometimes, sometimes I imagined he heard me.

I was a notorious rogue. That’s why there’s nothing written about me. My family repressed it all. Never spoke of me after I died. I’m not surprised they left my portrait behind. They hushed up my murder, you know. How San Francisco would have wagged its many tongues if word got out that I’d been stabbed by my male lover, body left out in the woods. What a waste.

Sean typed again. San Francisco 1860 unsolved murder. I held my breath. A stream of words appeared, words that led to other words and pictures. Nothing to do with me. He sagged but I grew agitated and began to pace behind him. I’d planted a suggestion while he was awake!

Sean, none of that matters now. All that matters is that I’m here now, with you. Say you won’t leave me alone again for so long. Do you know who stays here? Old married couples. Men and women who don’t have sex anymore, thank goodness. Talk to me, Sean. Make me feel alive.

He hooked his elbow over the back of the chair and stared right through me.

He shook his head. “Christ, I’m really losing it. Maybe if you got a real life, Sean, you wouldn’t be obsessing over ghosts.” He shut the lid of the computer. “Maybe in our next lives.”

In our next deaths, you mean. I’ll wait for you. Someday, you’ll come and never leave. Now take off those stupid pajamas.

To my eternal delight, he obeyed me.

Don’t forget to check out the other spooky, sexy fiction happening this week! It’s fun, it’s fabulous and it’s free!