Wow, is it Sunday already? Time does fly when you’re having fun and I’m having tons of fun with my newest WIP, tentatively titled Prowl. My main character is Jacqui (short for Jacquin), a fashion-designing, yoga-instructing cat shifter. Yeah, we’re having a tiny bit of fun.

Last week I introduced Jacqui as he was working on his latest creation.  Being human for too long cramps his style.

Right now, Jacqui had a strong urge to prowl. Now is not the time, Cat. Now is the time of toil.

He stepped out on his second story balcony and took a deep breath of fresh, slightly salty air blowing in off the water. His apartment overlooked Friday Harbor and at the cusp of sunset, both town and harbor were bathed in a pinkish glow, doing that twinkly and picturesque-as-all-get-out thing that happened on lovely summer evenings like this.

No, the stitching had to be perfect. The lines exquisitely formed to Zee’s angular shape, the drape immaculate. The last version had not been up to Jacqui’s exacting standards and he’d pulled out a day’s work in a pissy rage at himself, and now he was paying for it.

You’ll be more efficient after a prowl. 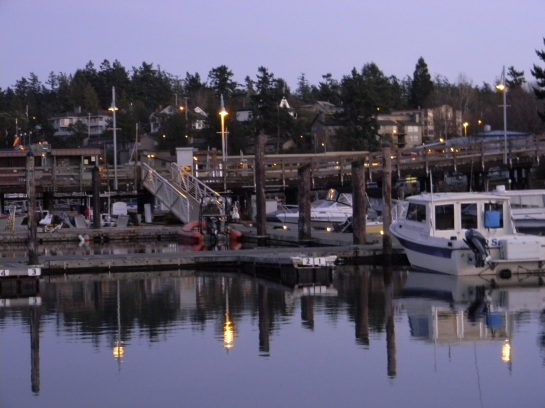 Friday Harbor getting its twinkle on.