Welcome to Weekend Writing Warriors, the blog hop where authors from across the spectrum of genres share excerpts from their work in ten sentences or less- just enough to tantalize your reading taste buds. My offering this week is from my upcoming shifter mystery/romance titled Prowl. I’m almost ready to set a release date. I have the cover and I love it! Hope to do the reveal soon. In the meantime, I’m continuing  the saga of “How Jacqui met Wyatt”.  Jacqui, in his cat form, decided to spy on Wyatt, his new neighbor. Unfortunately, he was startled by a pair of barking Pomeranians and ended up taking refuge on Wyatt’s shoulders- much to Wyatt’s surprise and dismay.

“Would you help me extract this cat?” Wyatt asked, the note of tension in his voice growing tauter.

“She says as it tries to lacerate my jugular.” Wyatt tugged on Jacqui’s tail again. Painful, yet oddly arousing.

“Maybe if you stopped yanking on him and tried to calm him down.”

“Maybe if you got your fu—if you’d get your dogs under control.”

“Poor thing is all scared—bad dogs!” She snagged one of the beasts and hooked it up to the leash. 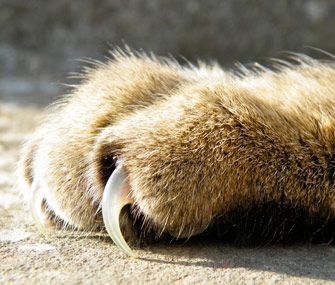 In case you’re wondering why Wyatt hasn’t dislodged Jacqui yet, imagine several of these imbedded in your flesh.