Hi everyone!  I’m switching gears here on Weekend Writing Warriors this week. I’ve just re-released Book 1 in my Edge of Night series, Betwixt and Between, and Book 2, Death by Starlight, is set to publish this Tuesday, July 10 (available for preorder here).  Death by Starlight has a shiny new cover that I’d like to share with you, so I thought I’d share a snippet or two as well, in order to celebrate and, uh, entice you to buy several copies 🙂

Death by Starlight is a gay urban fantasy set in Seattle (which you might guess from the cover). Zeke Stormshadow is a svarta, a dark elf, and in this scene, the ousted Queen of the Svarta, Ysolde, makes an unwelcome reappearance in his life.

“I can tell you who it is you seek, Stormshadow.” The voice came loud and sharp from a dark corner behind him. Zeke turned swiftly, Alistair’s dagger in his hand.

Ysolde emerged from the shadow spell she’d cast around herself. Her skin was still as white as bleached bone, her lips burgundy, black hair cascading down her back, but she appeared smaller than when she’d sat on her throne of thorns and ruled from the roots of the great tree. Now she looked like any other svarta royal after a sleepless century or two. Her silver-blue eyes still cut into him, seeking weaknesses to exploit.

“And what is the price for this knowledge, Ysolde?” he asked.

Ysolde held her hands out, palms up, in a gesture that didn’t match the carnivorous glint in her eyes. “I seek a truce with you and your clan.” 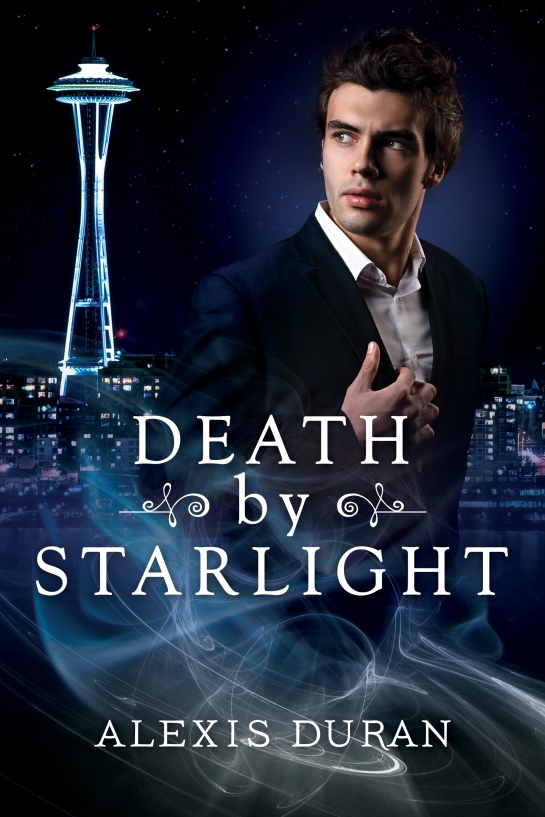 Thanks to Robin Ludwig Design, Inc. for the fabulous cover!