Hello and welcome to Weekend Writing Warriors, the blog hop where writers from a wide variety of genres share from their work in excerpts of ten sentences or less.  I’m sharing from my current project, a reimagined fairy tale inspired by the story of Snow White.

In this chapter, after reluctantly being forced to participate in the royal hunt, Prince Gabriel finds himself alone with the huntsman, Gavin Falkner, tracking a stag. Not only does Gabriel not want to kill an animal, he frequently finds he gets on better with the creatures of the forest than with other people. You can read last week’s snippet here.

All fell quiet except for the almost inaudible brush of Falkner’s hand against limbs as he moved them aside. There was no track to speak of, and Gabriel had to stop to return the arrow to its quiver and sling the bow across his back, in order to have two free hands.  In the brief pause, Falkner pulled so far ahead Gabriel couldn’t hear him at all, only see his dark head among the greenery and catch a faint whiff of his spicy sweat here and there, mingled with the scent of rain, mud and moldering leaves. Clearly Falkner wasn’t too worried about a gremlin leaping out of the bushes.

Loud chirps and twitters started in a tree above Gabriel’s head. He looked up to see a flock of chickadees settle into the branches.

“Shoo,” he whispered, and waved at them, but the little birds with large voices continued to follow and comment on his passage. They made such a racket Falkner actually stopped and looked back with a frown, as if Gabriel had orchestrated this forest concert.  Gabriel merely glared back, as if he didn’t know what Falkner was concerned about.

It was a plague, these birds, or squirrels, or sometimes even frogs; they couldn’t seem to leave him alone. 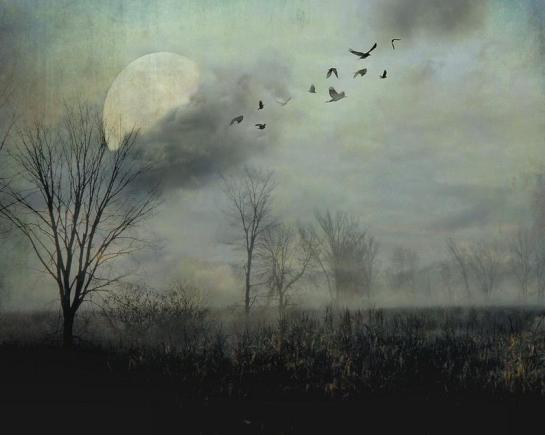