Hello and welcome to Weekend Writing Warriors, the blog hop where writers from a wide variety of genres share from their work in excerpts of ten sentences or less. I’ve been off the grid for a while, doing a lot of traveling, and when not traveling, recovering from traveling. My last jaunt was to Los Angeles for the World Fantasy 2019 convention, which was awesome.  I have a new goal: to have Snow finished in time for Salt Lake City next year! I might submit to one of the mainstream publishers like Tor now that things are loosening up for writers of LGBTQ fantasy, or I might just publish it myself, depending on how much frustration and rejection I’m in the mood for when the time comes.

So on to the snippet. In case you’re new to the story, Snow is a reimagined fairy tale based on the tale of Snow White. I’ve jumped ahead a bit from my last post;  Prince Gabriel and the huntsman Falkner have been separated from the main hunting party, and are tracking a deer on their own.  Gabriel would rather not kill anything, but alas, fate has its own ideas.

Gabriel rested his hand against a tree trunk and peered intently into the distance, trying once again to see what the huntsman did.  A flicker of motion caught his attention and his breath caught as a large stag lifted its head from where it had been nibbling on grass.

This was no ordinary deer.  Its coat was pure white and Gabriel wondered how he had failed to see the magnificent creature immediately. Then the deer stepped out of the pocket of weak light it stood in and the white coat faded to gray, rippling with streaks of silver. The beast lowered its head again, a great mass of antlers scraping the limbs above and releasing a shower of red leaves. Gabriel counted nine…ten points: a larger rack than any currently mounted in the great feast hall.

Time slowed and stretched as they lurked in the shadows without moving or uttering a sound, until Falkner elbowed him lightly in the arm.  This was a hunt, not a zoological tour, and the arrival of a white deer was surely auspicious.  Gabriel imagined the fanfare and excited soothsaying that would accompany this kill. 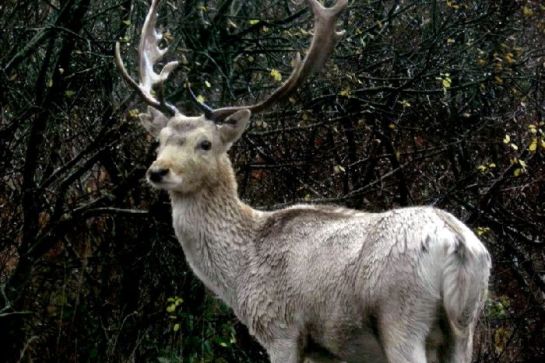