Welcome to my third post on the Seductive Studs and Sirens blog hop. This is a hop featuring amazing GLBTQ writers of romance and erotica.  Click the linky thingy there to continue on the hop and discover some really steamy reads. 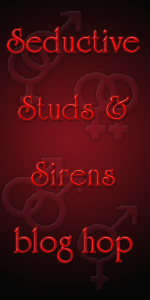 I’m continuing with excerpts from my current release, Touch of Salar.  M’lan, the monk with the healing touch, is working on a wounded warrior he knows only as “the major”.

The major’s perfect ass was unyielding. The tattoo of curling shard vines and small snakes led directly into the crease between the buttocks, and M’lan’s fingers wanted so much to glide right inside him. This transgression could get him dismissed from the order, cast down to a field hospital, and possibly beaten by the major himself. One never knew the preferences and prejudices of a patient. Besides that, their sharply distinct classes prohibited social interaction.

M’lan kept away from the danger area, plunging his knuckles into the hard, wiry muscles below the hip. He was starting to sweat heavily, and not just from the exertion. The major’s breaths became louder as he strained not to reveal his discomfort. A warrior would never ask a monk to back off, to be gentler, and M’lan took this as a sort of challenge, a wicked impulse that wouldn’t occur to a true monk.

About Touch of Salar: