Today, May 17th, is International Day Against Homophobia and Transphobia and that’s why over a hundred writers, cover designers, publishers and reviewers are participating in the Hop Against Homophobia and Transphobia.   Click the badge above to visit other participating bloggers for fun and prizes!  I’ll be giving away a $10 Loose Id gift certificate to someone drawn randomly from those who comment on this blog in the next week (don’t forget to leave an email address).  You can use it to buy my soon-to-be-released m/m erotic fantasy, Touch of Salar, or any  of Loose Id’s wide selection of LGBTQ erotica.  Also, if I get over ten comments (one per person please), I’ll be donating $25 to GLAAD!

Instead of writing this blog the other night I logged on to Pintrist and found myself caught in compulsive scroll mode for nearly two hours. In the search box I’d typed “handsome men” and the results did not disappoint. This is legitimate work, believe it or not. As a writer of m/m romance and erotica, I feel it’s my duty to offer a bit of man candy on my blog to enhance the value of stopping by.

So as I was compulsively scrolling and pinning, I found this photo of Orlando Bloom, one of my favorite hotties who would be on the cover of all of my novels if I had any say in the matter.

One of the comments under the photo was “he looks gay”. That’s all. My first thought was “all the better” as my characters are mostly gay and bisexual. Then I paused to reflect, what is it that makes a man “look gay”? I think the traditional stereotypic answer would be a man who looks feminine. So what does it mean to “look feminine”?

What I see in this photo aside from undeniable beauty is an aura of gentleness, even vulnerability. Perhaps a touch of style in the bracelets and long hair that a manly alpha lumberjack type wouldn’t sport? All good as far as I’m concerned, but I have to wonder about a culture that frowns upon signs of gentleness in its men.

The code of manliness seems more rigid and controlling than the code of femininity, partly I suppose because the misogynistic tendencies in our culture understand a woman’s desire to be “more manly” whereas a man’s tendency to be feminine is roundly scorned. That’s not to say that women are not judged and found lacking by the same wonky standards.

Handsome women, i.e. women who look masculine, exude strength, confidence and probably don’t have a pert nose and a bow in their hair are judged as not attractive or at least not optimal mating material. A woman should exude soft, nurturing, sexy submission, if our entrainment and advertising industries accurately indicate anything.

Here’s one for the ladies: 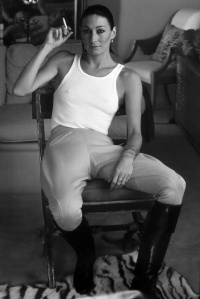 I’m always surprised when I see real life indicators supporting restrictive, damaging expectations that limit one’s ability to appreciate beauty. (Does Pintrist count as real life?) I look at that photo of Orlando and basically drool and cry myself to sleep, but some bizarre creature out there looks at it and thinks “too feminine.” Likewise, some misguided fools won’t find Angelica quite feminine enough, and therefore “unattractive”.

Maybe I’m too sensitive, I don’t know, but I’d like to think we’ve moved beyond shoving people in to boxes designed to meet our primal mating requirements. Not manly enough= doesn’t suit my personal needs=bad. Labeling and judging our fellow humans based on taste rather than reveling in the simple beauty of the human form, free of rating systems, preconceived prejudices or, let’s face it, blind stupidity, should be a thing of the past. Someone might not be your personal cuddle fantasy, but that doesn’t lessen their beauty.

I admit, my tastes run toward gentle, vulnerable, perhaps feminine looking men and they always have. But it wouldn’t occur to me judge, say The Rock and leave the comment “he looks het”. Or maybe I would. That would cause a few head scratches I’m sure.

When I dropped off my rental car at the train station in Nice, I was looking forward to one night in that warm, Mediterranean metropolis of blue waters, beautiful bodies and seaside clubs. Coming down from the mountains of the Var region, I was a bit taken back by the heat, which approached 40 Celsius, or 100 Fahrenheit.

Being the nostalgic sort of person I am, I’d located the only hotel in Old Town, several blocks from the beach (Hotel Villa la Tour). Once an 18th century convent, it sported long, steep stairs, no elevator and no air-conditioning. But the ambiance! The ambiance couldn’t be beat.  Because I’d asked for a room with the view, I was given the honeymoon suite on the top floor.

Room with a view

Besides a shower big enough to fit all of your BMFs, there were cloth roses on the wallpaper, a tiny wrought iron balcony, and, as mentioned before, no air conditioning.  After lugging my souvenir stuffed suitcase up five flights (a charming maid helped me on the last two flights), sweat dripped from my every pore.  Undeterred, I took advantage of that vast shower and readied myself for a night on the town.  On the last day of a three-week jaunt, I’d run out of warm weather things to wear except for a clingy silk dress I’d purchased from a market vendor in Fayence. 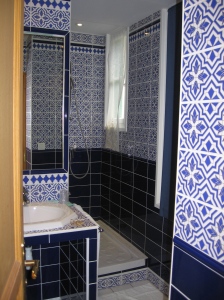 When I wriggled my still damp, overheated body into it, I found it clinging indeed.  And I didn’t have an appropriate bra for a strappy dress.  The affect was not pleasing.  When I stepped out onto the crowded pulsing cobblestoned streets of old town, I alone seemed to feel more like hiding than strutting.  Not one to linger on my perceived imperfections, I soon basked in the near tropical delights of this fascinating city where Art Deco meets the renaissance meets medieval towers.  The markets and narrow streets are an overwhelming cornucopia of colors, scents and sounds, almost enough to make me forget my lack of personal allure.

On the Promenade des Anglais, the long walkway that lines the oceanfront, a host of glistening tanned bodies from every corner of Europe and beyond strolled, frolicked and danced.  Bikini clad urchins mixed with wing-sporting models.  In my own sticky funk, I grew ever more aware of my pale, Slavic skin, still unthawed after a long winter under wraps in northern realms; the sweat that washed away all attempts at cosmetic refinement; the sun blocking floppy hat that trammeled my locks to a flattened mass, and the unflattering way my panty lines and bra straps were highlighted by the clingy silk.  Not the lovely image I like to present to my public.

Nonetheless, as I passed from the markets of old town to the promenade, a dark-haired, dark-eyed gentleman in a white apron, smoking a cigarette, called out to me, “Bonjour, beautiful lady!”

“Bonjour!” I said, waving my hand.

And for the rest of the evening, I was beautiful. As was everyone in that most beautiful of cities.