Today, May 17th, is International Day Against Homophobia and Transphobia and that’s why over a hundred writers, cover designers, publishers and reviewers are participating in the Hop Against Homophobia and Transphobia.   Click the badge above to visit other participating bloggers for fun and prizes!  I’ll be giving away a $10 Loose Id gift certificate to someone drawn randomly from those who comment on this blog in the next week (don’t forget to leave an email address).  You can use it to buy my soon-to-be-released m/m erotic fantasy, Touch of Salar, or any  of Loose Id’s wide selection of LGBTQ erotica.  Also, if I get over ten comments (one per person please), I’ll be donating $25 to GLAAD!

Instead of writing this blog the other night I logged on to Pintrist and found myself caught in compulsive scroll mode for nearly two hours. In the search box I’d typed “handsome men” and the results did not disappoint. This is legitimate work, believe it or not. As a writer of m/m romance and erotica, I feel it’s my duty to offer a bit of man candy on my blog to enhance the value of stopping by. 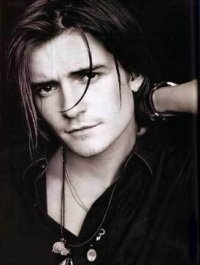 So as I was compulsively scrolling and pinning, I found this photo of Orlando Bloom, one of my favorite hotties who would be on the cover of all of my novels if I had any say in the matter.

One of the comments under the photo was “he looks gay”. That’s all. My first thought was “all the better” as my characters are mostly gay and bisexual. Then I paused to reflect, what is it that makes a man “look gay”? I think the traditional stereotypic answer would be a man who looks feminine. So what does it mean to “look feminine”?

What I see in this photo aside from undeniable beauty is an aura of gentleness, even vulnerability. Perhaps a touch of style in the bracelets and long hair that a manly alpha lumberjack type wouldn’t sport? All good as far as I’m concerned, but I have to wonder about a culture that frowns upon signs of gentleness in its men.

The code of manliness seems more rigid and controlling than the code of femininity, partly I suppose because the misogynistic tendencies in our culture understand a woman’s desire to be “more manly” whereas a man’s tendency to be feminine is roundly scorned. That’s not to say that women are not judged and found lacking by the same wonky standards.

Handsome women, i.e. women who look masculine, exude strength, confidence and probably don’t have a pert nose and a bow in their hair are judged as not attractive or at least not optimal mating material. A woman should exude soft, nurturing, sexy submission, if our entrainment and advertising industries accurately indicate anything.

Here’s one for the ladies:

I’m always surprised when I see real life indicators supporting restrictive, damaging expectations that limit one’s ability to appreciate beauty. (Does Pintrist count as real life?) I look at that photo of Orlando and basically drool and cry myself to sleep, but some bizarre creature out there looks at it and thinks “too feminine.” Likewise, some misguided fools won’t find Angelica quite feminine enough, and therefore “unattractive”.

Maybe I’m too sensitive, I don’t know, but I’d like to think we’ve moved beyond shoving people in to boxes designed to meet our primal mating requirements. Not manly enough= doesn’t suit my personal needs=bad. Labeling and judging our fellow humans based on taste rather than reveling in the simple beauty of the human form, free of rating systems, preconceived prejudices or, let’s face it, blind stupidity, should be a thing of the past. Someone might not be your personal cuddle fantasy, but that doesn’t lessen their beauty.

I admit, my tastes run toward gentle, vulnerable, perhaps feminine looking men and they always have. But it wouldn’t occur to me judge, say The Rock and leave the comment “he looks het”. Or maybe I would. That would cause a few head scratches I’m sure.

20 thoughts on “Hop Against Homophobia and Transphobia”