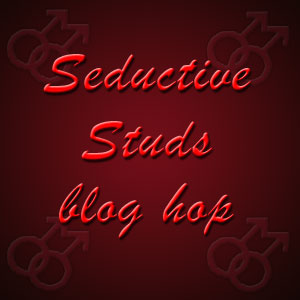 Welcome to Seductive Studs, the blog hop dedicated to m/m romance by the people who read, write and review it.

This week I’m sharing another excerpt from Curse of Salar, Book 3 in the Masters and Mages series, release date January 5, 2016.  At an official function in the great hall, Prince Dezra’s attention (and imagination) have been captured by a stranger, Captain Rayn Nevar.

Dezra decided to turn his divine wrath on the rude captain and returned his stare. The rest of the hall fell away, and they might as well have been the only two people in it. Though the captain stood at least fifty feet away, his gaze penetrated Dezra’s defenses and threatened his secret thoughts. To his bemused annoyance, Dezra developed a growing erection that would not subside.

This man is dangerous, Dezra thought, but refused to look away. Finally the captain shifted his attention to his minister, who prattled on. Dezra couldn’t remember the last time he’d been aroused at a formal dinner. Probably when Lashmi had been delivered as tribute from Tovald. Dezra regretted having told Jai not to wait in his chambers. He could always send for the servant but instantly knew Jai would be a poor substitute for the fantasy catching fire in his mind.

Blurb for Masters and Mages 3: Curse of Salar

In the desert kingdom of Jahar, the rule of mages has been overthrown and the ancient lineage of sorcerer kings wiped out. Prince Dezra and his sister are the last living members of the royal family and are held prisoners in their ancestral palace.

Prince Dezra lives a life of lies and deceit. In order to stay alive, he must pretend to be a drug-addicted wastrel, trusting no one, isolated from even his sister who has chosen to cooperate with the government that executed their parents.

Into his lonely existence comes a man who should be his sworn enemy; Captain Rayn Nevar. Dezra is irresistibly drawn to the rough soldier and his longing for a simple sexual encounter quickly morphs into a dangerous obsession.

Captain Rayn Nevar knows he should stay far away from Prince Dezra, but his desire for the beautiful young man overrides all common sense. Despite the fact that Dezra’s ancestors destroyed Rayn’s family, the captain finds himself in a position of protecting the prince from the many schemers who believe the last of the mages should be annihilated.

When treachery leads to Dezra’s escape, he is at last free to bond with the serpent god Ka’alar and develop his long repressed powers. Only the arrival of a mysterious monk with powers greater than Dezra’s stops the prince from using black sorcery to destroy all who stand in his way, including Rayn.

As Jahar edges toward another war between masters and mages, Rayn must question his devotion to his increasingly deadly lover while Dezra must decide if ultimate power is worth the ultimate sacrifice.

Don’t forget to continue the hop at the Seductive Studs home page.  Lots of steamy m/m goodness goin’ on.

One thought on “Seductive Studs ~ This Man Is Dangerous”