Welcome to another exciting episode of  Weekend Writing Warriors, where writers share in ten lines or less a scene from their work.  I’m continuing to share from my soon-to-be-released m/m fantasy, Gryffon Hall.  Wyler is seated next to the mysterious and somewhat barbaric Lord Rouchet at a state dinner. He’s discovered Rouchet owns a vast library, Wryler’s idea of heaven.

“I’d like to see this library someday,” Wryler said and immediately regretted it. Such an admission might lead to an invitation that would be awkward to decline. He couldn’t for the life of him imagine traveling to the edge of the civilized world to the gloomy and haunted Gryffon Hall, looming as it did at the edge of the monster-infested Black Forest. How odd that a wondrous collection of books sat hidden in such a remote and unlikely location.

“Perhaps you will,” Rouchet said, and swilled his wine. “So what else do you do besides read?”

“Well, I’m currently attempting to find a cure for the Trembles, otherwise known as Chillbanes. I’ve discovered a connection between—”

“I mean, what do you do for entertainment?”

“You may not think so, but study and deep thought are entertaining,” Wryler said, then felt his cheeks heat as he heard his words and suspected they might be construed as insulting, as if the lord didn’t partake in deep thought himself. 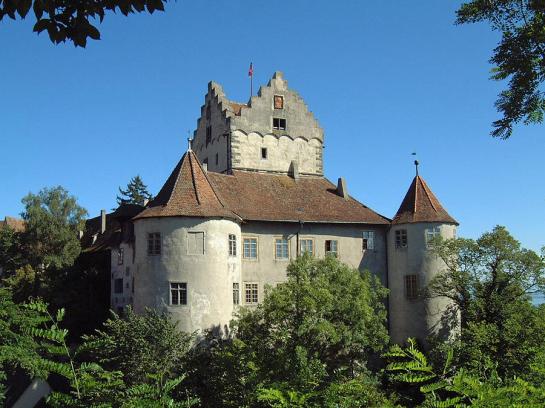 Meersburg in Germany- appropriately forbidding but the sky is too blue.

14 thoughts on “Weekend Writing Warriors ~ A Remote and Unlikely Location”