Hi, everybody!  Welcome to Weekend Writing Warriors. I missed last week due to blogging overload. Matthias released on the 2nd and my book tour launched this past week, so I have to admit I just ran out of words. Hate it when then happens.  But I’m back and happy to be here, carrying on for a while with Matthias.  I pick up where I left off last time.  Dylan, a reporter, is having a talk with his boss Amanda about the subject of their current investigation, Matthias Krall.

Dylan wisely resisted mentioning his crush on Matthias. “I had a class with him when I was a sophomore. It was an upper-level course, so I assumed he was a senior.”

“And of course you took advanced classes,” Amanda huffed. “Listen, boy wonder, the plug has been pulled on the Rising Star story—pure speculation, no hard facts, according to Marley.”

Amanda’s eyes blazed, and she looked like she wanted to hit something. Dylan rolled his chair back until he was out of striking range.

“He wasn’t registered, he just attended classes. Either he was improving his mind or preying on rich kids, or both.”

Amanda’s lips thinned as she processed this. 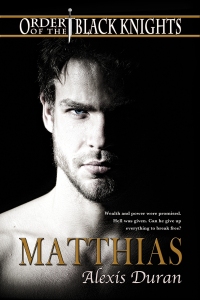 From Louisiana swamp rat to revivalist huckster to skilled con artist, Matthias Krall clawed his way out of poverty using his natural gifts of grift and manipulation to become the leader of an exclusive retreat center. Exploiting the guise of spiritual guru, Matthias seduces the rich and powerful into turning over their lives and fortunes to his control. But wealth and a small cadre of loyal followers can’t protect Matthias from the betrayal he knows is imminent. Everyone wants what Matthias has, except for one man who wants to destroy it. Dylan Connelly is a reporter who’s determined to prove the charismatic recluse is not only a fraud but a murderer.

Irresistibly drawn to Dylan despite the warnings in his gut, Matthias lures Dylan to his island retreat, determined to destroy his enemy once and for all.

Check out this great review! “I have to commend Alexis Duran because this story truly sucked me in and wouldn’t let go. As much as I wanted to put it down, I just couldn’t. ” 5 Stars from Bayou Book Junkie

Order of the Black Knights

Every century has seen its knights, but they are not always seen. Some of them do what must be done—getting their hands dirty when no one else is willing. Assassins and antiheroes who work from the shadows, they are called the Black Knights. From the time of the society’s creation in the 1100s, these men are cursed to repeat their lives of bloodshed. But for each knight, there is one who can bring out the man that waits inside and break the cycle. The question is whether or not the knight will kill his true love before he figures it out.