Welcome to Weekend Writing Warriors.  I’ve been sharing from my latest release Death by Starlight, an m/m urban fantasy.  I’ve got a few more scenes to go until I reach the end of the current chapter, then it’s on to the new shiny thing! Which is very, very shiny. But I promise I won’t leave you hanging, at least not too much. Dark elf Zeke and Alistair the shaman have succeeded in luring Mellosa, a rather large and intimidating mermaid, to Alistair’s boat.

Mellosa pulled herself higher out of the water, exposing small, flat breasts much better for streaking aerodynamically through the water than the romanticized versions of myth. The boat rocked, dipping at an alarming angle. If she wanted to, she could have them both in the water in a flash. Mindful of this, Zeke cast a warming cloak around himself and Alistair.

“Who’s the elf?” Mellosa demanded. “He made this?” She lofted the blue agate accusingly.

“Just a friend of a friend who owed me a favor. I needed to talk to you and didn’t know how else to go about it. Mellosa, I’ve loved you for half a century.” 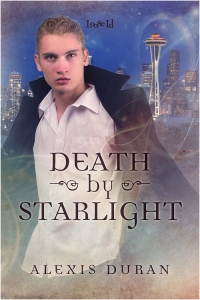 Betwixt and Between: Edge of Night Book 1 is available at these retailers:  Amazon   Kobo   Barnes & Noble  Books2Read