Greetings and welcome to Weekend Writing Warriors. As I write this, smoke has devoured the sun again, so I guess it’s going to be another good weekend for hunkering down and reading everyone’s snippets! (Always look on the bright side, I say, even if it is feeling a little end-of-the-world-ish around here).

At last! I have arrived at the end of the chapter. I’ve been sharing from Death by Starlight, specifically a scene where Zeke the dark elf and Alistair the incompetent shaman go out on the Salish Sea in search of Mellosa the mermaid. They find her, but all is not wine and roses for the besotted Alistair, and things aren’t looking too good for Zeke, either. I must beg your forgiveness for some creative editing in order to fit the last few lines of the chapter into this snippet.

“Let go of me!” Alistair shouted, jerking to free himself.

“You’re mad!” Zeke held Alistair tighter and hoped a quickly devised buoyancy spell would be strong enough to hold both of them.

Mellosa breached again—this time, she brought her tail down square in the middle of what now seemed like a tiny craft. Fiberglass shattered, wood splintered, and water quickly flooded the boat.

Alistair slipped out of Zeke’s grasp as they both tumbled into the sea and Mellosa’s infernal tail smacked Zeke in the chest, knocking what was left of the air out of his lungs. He took a big choking swallow of saltwater before he bobbed to the surface alone, thinking Ian will never forgive me, as another waved crashed over his head and webbed fingers tugged at his ankles, testing the buoyancy spell to its limits. 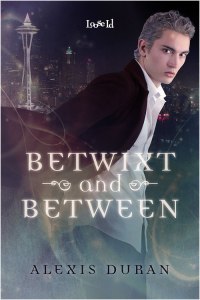 Betwixt and Between: Edge of Night Book 1 is available at these retailers:  Amazon   Kobo   Barnes & Noble  Books2Read

11 thoughts on “Weekend Writing Warriors ~ Afraid of the Sea”