Welcome to Weekend Writing Warriors, the hop where a bunch of fabulous writers share snippets of their work in eight to ten sentences.  I’ve been sharing from my m/m space opera, From Mars, With Love.  So far our hero Eli has been abducted by slavers, stuck in a stasis pod for the journey to Titan, then rescued by a not-so-friendly mystery man.  This scene picks up from last week, with Eli’s rescuer speaking to someone on the other end of a communication device.

“Got one ground rat down here,” the man said into his mic, which turned out to be attached to the stiff collar of his jacket. “Seems to be intact and mobile. Who’s in charge of rounding up the civs?”

“Rest of the cargo is in pods – makes it easier, you know.”

The hard blue eyes turned on him again and looked him up and down. Eli’s exposed skin prickled with goose bumps but he refused to cower. He moved away in case the man in black decided to shove him back inside the pod. 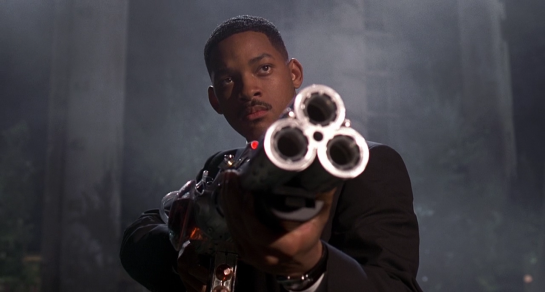 This photo needs no caption, and yet here I am writing one. Will Smith. Men in Black. Sigh.

From Mars, With Love follows the adventures of Eli and his pal Rilke, two down-and-out scavengers from earth as they’re abducted by slavers, arrested by space marines, and dumped on an unwelcoming outpost on Mars. Eli’s troubles are only beginning when he finds out the ring his mother gave him contains the life force of a powerful but dormant alien and the mysterious man he has a huge crush on happens to be an alien artifact smuggler.  Eli’s just trying to make it on Mars, but can he survive the dangerous political intrigue swirling around him? This erotic space opera is a work-in-progress. Stay tuned to this blog for ongoing excerpts and updates.

10 thoughts on “Weekend Writing Warriors ~ The Man in Black”