Hello and welcome to Weekend Writing Warriors, the blog hop where writers from a wide variety of genres share from their work in excerpts of ten sentences or less. I’m sharing from my current work in progress, a reimagined fairy tale with the working title of Snow. Yup, you guessed it. It’s inspired by the story of Snow White.

In this scene, Prince Gabriel is in the woods with the head huntsman, Gavin Falkner. They’re tracking a stag, which Gabriel hopes they don’t find. You can read the last snippet here.

“Are we getting any closer, do you think, or has the stag sensibly fled into the Black Forest by now?” Gabriel asked.

“Not likely, the animals don’t like the forest anymore than we do.  It doesn’t appear to be running. We may catch up to it yet if we move quickly and stay silent.”

“Well, let’s stay close together so the birds don’t…cluster.”

Falkner gave him a quizzical look as if trying to decide what sort of man attracted birds, then moved on. This time he paid more attention to Gabriel’s progress and paused occasionally, letting go of low pine branches just in time so they swung into Gabriel’s face. Gabriel didn’t think this was on purpose. The man was simply intent on his job of tracking and he was an irritant, no more.

But as they continued on in this fashion, memories of the time when he was the object of his brother’s scorn—and therefore Falkner’s as well—arose against his will, and all the feelings of self-doubt, inadequacy and isolation came creeping out of the dark places in his heart where he’d banished them. 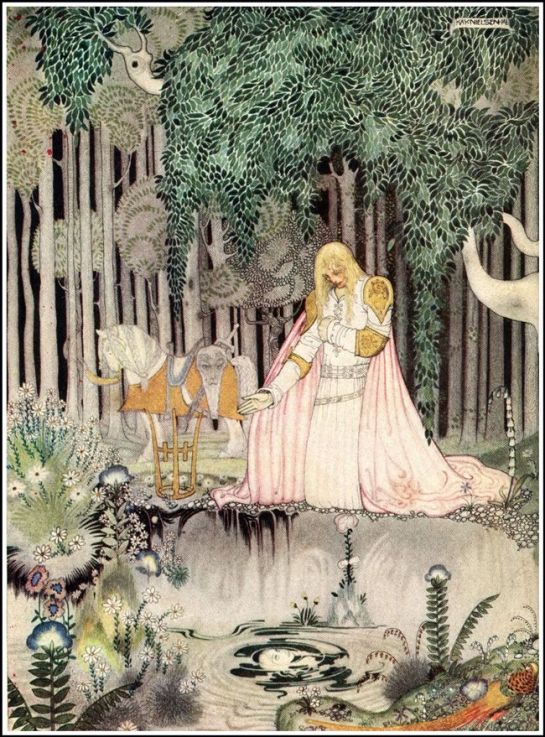 I’m just grooving on these vintage fairy tale illustration. This is from 1914, from the book East of the Sun, West of the Moon illustrated by Kay Nielsen.