Hello and welcome to Weekend Writing Warriors, the blog hop where writers from a wide variety of genres share from their work in excerpts of ten sentences or less.  I’m sharing from Wild: Jacqui the Cat Mysteries #4, otherwise known as The Book from Hell, which appears to be cursed by the gods.  First, it took me twice as long to write as it was supposed to, and now forces beyond my control are conspiring to keep me from publishing.  But it will be worth it! I swear.  I swear a lot, actually, when it comes to this book.  But enough of my writerly woes.  In this scene from the first chapter, Jacqui in his cat form is confronting a new cat in the hood, who isn’t acting like any other cat Jacqui has ever met.

Gradually the hairs along its spine lowered and it flopped over on its side. After a moment, it rolled onto its back, staring at him from an upside down position.

The ruffian kept its glowing eyes on Jacqui’s, and an uncomfortable feeling started to grow in Jacqui’s belly. Another cat had never supplicated before him in this manner, and they usually averted their eyes, because eye contact between cats signaled a type of challenge.

The stray rolled back and forth, coating its grimy fur with bits of gravel and twigs. Clearly male, unfixed, it was sadly a case for the local animal rescue center. They didn’t euthanize, except for when it came to a wild mutation like Cat.

Okay, Ruffian, Jacqui thought at the cat, go ahead and relax and roll in the dirt. Tomorrow I’ll get you into a carrier and take you to the shelter.

No chance, said the cat, flopping back to its side.

(That’s ten. Here’s a few more to finish out the moment):

Did that beast just talk to us?

Jacqui stilled and focused very hard. Did you just talk to me? 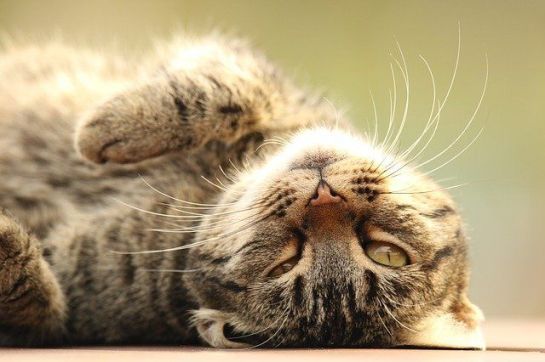